We get lots of iPhone, Android, iPad apps everyday for translation into more than one or two languages, and we have taken action to make translation to several languages easier and more user friendly than ever.

After getting feedback from our clients, we made a big change to the system and wanted to update you. Now there’s no more need to press one button per language to send strings for translation; you can send strings to as many languages as you wish in one go!

After uploading the file with your app strings, you have two options:

1) Tick the box ‘All languages’ and send to translation to all the languages you entered by clicking on the button ‘Begin marked translations’, which you’ll find at the top and bottom of the languages:

Sending for translation to all languages 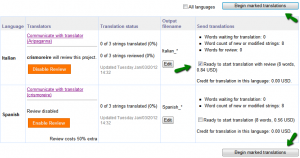 Sending for translation to selected languages

As you can see in the sample above, the client selected only Italian. Let’s suppose you have five, ten or fifteen languages -it does not matter- in all, you can send them by bunches. It’s up to you.

This is the first step in a major re-haul of the Software Localization projects interface and functionality. We’ll write about the next round of changes soon!