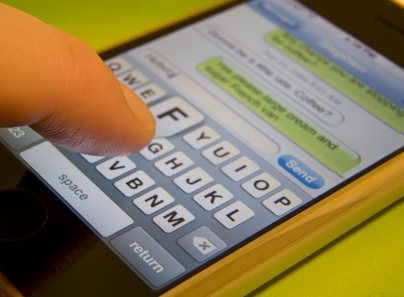 This guide will show you how to convert a single-language iOS application, built with Xcode, into a multilingual application.

You’re invited to use our translation system for free and cut down the time it takes to manage and coordinate translation work for your application.

The process of localizing an iOS application involves these steps:

Since iOS apps are multilingual by design, once your application is available in multiple languages, the device already knows what to do. It will display the GUI texts in the right language, according to the devices’s language setting.

All iOS applications are built using Unicode texts, encoded as UTF-16. The iPhone and iPad simulators support this format and will allow you to preview your translated application.

The easiest way to make a file localizable with Xcode is to simply remove the file from the project and, in Finder, move it into the localized directory. Make sure you click on “Delete References” and not “Also Move to Trash” when removing the file from your project, so that the file itself isn’t deleted but only the reference to it in the project is removed.

To extract the strings from your Interface Builder resource files, you need to run a tool like ibtool, included with the standard developer kit install.

To extract the files, open Terminal in the project directory and run the command:
ibtool --generate-strings-file Example.strings en.lpoj/Example.xib
This will create the file Example.strings. Open it and you’ll see a bunch of object-string value pairings.

Go through this document carefully and check its contents. You can remove unnecessary strings, which don’t require translation.

The resource file may contain duplicate strings, such as some of the titles for buttons in different states.

Normally, iOS applications contain two kinds of texts. There are the application’s interface (managed by the Interface Builder) and embedded strings that appear inline in the code itself.

The strings in the interface are already arranged in a resource file and we need to make sure that the code itself only uses strings that are read from a resource file too.

We need to edit the source files and change all inline strings to look like this:

Now, “Hello World” is actually a token. The NSLocalizedString function will produce the string that will be output. It will return the localized string according to the application’s language. NSLocalizedString will read the Localizable.strings file from the localization directory.

Go through all your code and determine which strings are user-facing and should be localized. Don’t localize strings the user will never see, such as keys in an NSDictionary (unless, of course, you ever display those keys).

Did you notice that “hello message” (the second argument)?

This is a comment, which will go into the resource file and be also visible to the translator. It’s very important to add comments in places where the text is not self explanatory. This way, the translator who’s translating your application will know what the text is used for and how to translate it correctly.

genstrings will collect all the strings that need to be translated from the source files and create the Localizable.strings file. To run it, open Terminal, go to the project directory and run:

This will pull all the keys from the NSLocalizedString calls, and compile them into one Localizable.strings file in the en.lproj localization directory. If your class files are in a different directory, make sure you include them at the end of this command (e.g. Classes/*.m).

You can send both files for translation by ICanLocalize.

You can upload the resource files in UTF-16 or UTF-8 encoding. The tool will extract pairs of labels and strings (and comments if there are any). Professional translators, who have ample experience in localizing iOS applications, will translate just the strings. You will communicate directly with your translators to make sure that translation is not just accurate, but also adapted to the culture and customs of other countries.

You will need to create an account (free). Then, create an iOS translation project, upload your resource files, choose which languages to translate to and pay for the translation. Once completed, you’ll be able to download the localized resource files and import back to your application.

And, even long after the translation has been completed, should you ever need to update or fix it, our translators will be happy to help.

5. Importing the translation to the iOS application

Once you’ve gotten your translated strings file back, fire up Terminal again and use it to build a localized copy of that xib.

Assuming your source language was English, go to your project directory, open the Terminal and run:

This will copy the English-localized Interface Builder file into the other localization directory, and replace the values of all objects with those in the translated strings file.

You now have a localized .xib, but the file isn’t ready to go yet.

Adding the Localized File to Xcode

Open up the translated file in Interface Builder, and go through everything. Often the lengths of different strings will have changed significantly. Translation from English to German and French is often 50% longer than the original text. You may need to adjust the layout slightly to make sure that everything is visible.

If you manually removed any duplicates, now is the time to put them back by duplicating the translated strings. For example, if two buttons shared the same title, and you removed one of the buttons from the .strings file you generated earlier, you will now need to copy the title from the button that did get translated.

You only need to do this if you edited the .strings file before submitting to translation. ICanLocalize‘s system already removes duplicates from the translation and re-inserts them to the translated resource file.

Your iOS application should now run multilingual! But wait, there’s one more step.

6. Test the translation in an iPhone or iPad device

After all is done, you’ll have a multilingual application.

To test it with an actual phone, you’ll need to change the device’s language. You can follow Apple’s tutorial for switching iPhone languages.

Here are some things you should look out for:

If strings in your Localizable.strings file are present in the translated file, but aren’t being localized on the device, check the character encoding of the file.

Unlike the iPhone simulator, the actual device only recognizes strings files that are formatted UTF-16. Always test your localizations on the device, as the simulator and the device do not always behave the same way.

The translated resource files you download from ICanLocalize are UTF-16 encoded. They’re contained inside gzip archives to make sure that your browser doesn’t alter them when you download.

Updating the translation when the iOS application evolves

ICanLocalize makes it easy to maintain your translations up to date. When the application evolves, new strings are created and existing strings may change.

Finally, upload the new resource files to your existing project in ICanLocalize. The system will detect new or modified strings and will only have them translated. You will need to pay only for updating the translation and not for doing it from scratch.

Note: when a string changes it needs to be translated again entirely. To reduce the cost of updating translations, we recommend splitting large strings into several smaller ones. This way, when you make a change, the part that needs to be translated again is smaller and costs less. Strings should be large enough to be clear on their own, but not too large, so that updating them isn’t expensive.

Do you need translation for your iOS application?

ICanLocalize offers professional translation optimized for iOS applications. We can help you turn your app multilingual quickly, easily and at a low cost.

Expert translators, writing in their native languages will translate your application, helping you get more sales from around the world.

Sign up and translate your app
Starting at 0.135 USD / word for expert translation.

“I used ICanLocalize to help translate my iOS gardening app, Plant Album. I’ve used their services in the past and I continue to be impressed with their professional staff, the quality of the translations, and their easy to use website. Highly recommended for all your localization needs!”

“We’ve been using ICanLocalize since 2012 and it has really simplified our workflow when it comes to getting our content translated for different markets. No more hunting down translators for different languages, teaching them how to use the translations tools, settle invoices individually etc. since ICanLocalize handles all that stuff for us! We use ICanLocalize services for translating our websites, apps, newsletters and other marketing materials, and you can always count on a fast turnaround. I realize this whole statement sounds like a paid ad or something, but I really haven’t written anything that’s not true or is not my genuine opinion! I would recommend ICanLocalize anytime!”

“ICanLocalize is the best solution for fast and high-quality translations of your app. We use its services in all our applications with good results and positive feedback from our users. I will recommend to use it  to localize your applications.”

“Using ICanLocalize was incredibly simple. Translators and very helpful and the translation process is very straightforward. This service is affordable for developers of all sizes and ICanLocalize has helped us reach more customers than ever before.”

If you’re thinking about translating and republishing this tutorial, please contact us first. Tell us where you want to publish it and a few words about yourself.