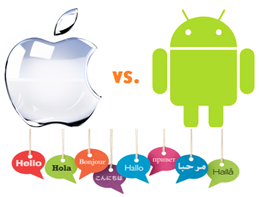 Nowadays, app localization is a must, and this is no secret. Any well-informed developer knows that the key to an app’s success lies mostly in its capacity to reach every corner of the world, and considering that there are almost 7 billion mobile subscriptions worldwide, this shouldn’t be an irrelevant matter.

What really is a secret, however, and indeed almost an unknown fact for most people including developers, is that there are significant differences between iOS localization and Android localization. Even though they have several general similarities, iOS and Android apps differ in some aspects that are worth knowing about and considering.

Where can we find these differences?

These differences appear in most apps and system menus, and they are common in almost every non-Asian language.

One simple and common example is the word “Settings.” In Android devices, the Spanish translation is “Configuración,” whereas in iPhone devices, the term used is“Ajustes.” Thus, a single English word is translated differently for the same language. 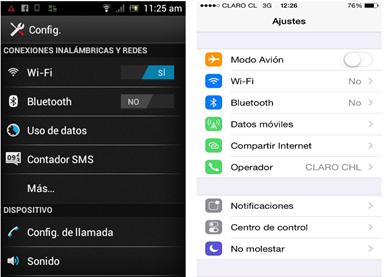 Why is this important?

This is important because, as human beings, we are programmed by nature to be accustomed to things. Remember the time you switched from Windows 7 to Windows 8? Most of us have experienced this transition at least once in our lives. Wasn’t it a bit difficult to get used to the new Windows 8? It probably was, but we ultimately accepted the change, because we use it every day.

The same principle applies to apps and mobile operating systems. We become accustomed to the interface and buttons, but when we see something different—new words, for instance—we immediately feel there is something strange, something we can’t exactly perceive, but we know it’s there, and we can’t get used to it because it isn’t permanent and it isn’t present in every device, only in a few random apps that weren’t properly translated and now seem odd to the user.

“We have to see how the buttons are translated. It’s very important to always use the same terminology, otherwise the user will feel puzzled. For me, it’s not a problem, I know that there are 2 different systems and we have to observe both.”

How can I make sure my apps are correctly translated according to its OS?

Correct translations can be ensured by hiring professional translators who are experts in app localization.

These translators are highly experienced in the field and know about these differences. They have the tools and knowledge required to research and translate apps so that they conform with the OS in which they will run.

“In fact, generally speaking, not only for iOS and Android, it’s always important to consider the accepted translations, especially when they are inserted in widely used software or device structures (menus, system apps, …), since the risk is to create confusion in the users who are accustomed to a certain environment. So, a translator’s work is not simply to transfer meaning in another form, but also to investigate on the sector and environment he/she is dealing with, to make sure that the final users of that translation find themselves at ease with the correct form they’re accustomed to.”

ICanLocalize is a leading translation service provider that works with the best native professional translators, and offers translations in more than 45 languages. We are experts at mobile-app localization (including iPhone and Android localization), website localization, and software localization. Find out more about our great rates and quality of work here: (http://www.icanlocalize.com). You are welcome to contact us at hello@onthegosystems.com or on Skype (icanlocalize).