Africa is the second largest continent on Earth. Its population of almost one billion people is relatively young. In many African states, over half of the population is under the age of 25. A quarter of all languages in the world are spoken only in Africa. 1

Today we are going to battle stereotypes that African residents speak “African language”.

This term includes many languages, we’ve never even heard of. They are used daily by millions of Africans to communicate, work, entertain, buy and sell.

There are over 2,100 languages in Africa. Simple focusing on this handful will turn a great percentage of its natives into your customers.

Such languages as Arabic, Afrikaans, Amharic, Lingala, Somali, Swahili, Yoruba, Zulu are spoken by tens of millions of African communities. 2 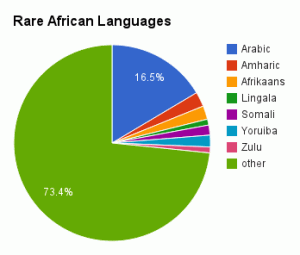 Only a few of us have probably heard of the majority of these languages. And yet they are in widespread use across Africa. Its rapid population increase gives hope that they will become more familiar to the rest of the world. Especially in the context of the world’s tremendous interest in this fabulous continent and the richness of its languages!

ICanLocalize is a leading translation service provider that works with the best mother-tongue professional translators, translating into more than 45 languages. We are the experts in mobile apps localization (including iPhone and Android localization), website localization, and software localization. Find out more about our great rates and quality of work here: (http://www.icanlocalize.com). It is now available in Russian. You are welcome to contact us on hello@onthegosystems.com or on Skype (icanlocalize).