Most Popular Languages for iPhone and Android Localization

We’ve compiled statistics from all iPhone and Android localization projects in 2010 and checked which languages are most popular. Here are the results.

ICanLocalize gets a fair number of mobile apps every week. The majority is still iPhone and Android is on the rise too. Often clients ask us which languages we recommend to translate into, in order to get the best ROI (return on investment). I figured that instead of just guessing, I might as well check what we’re actually doing most. 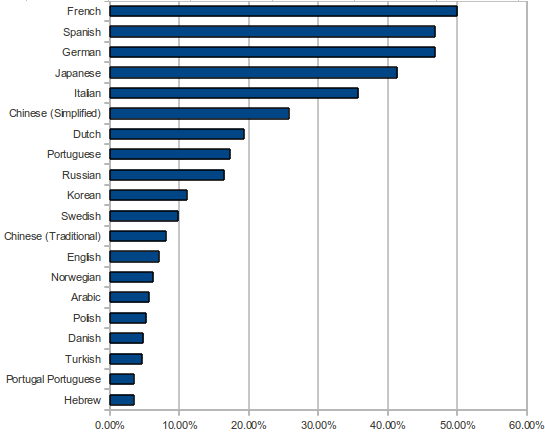 These are the results (showing how many of our projects include each language):

The most popular languages

The most popular translation languages for mobile apps are French, Spanish, German, Japanese and Italian. We have hardly any project that doesn’t include at least one of them.

When translating to Chinese, we’re asked which Chinese variant to choose. There are about 1/2 billion people speaking both Traditional and Simplified Chinese, so it’s a tough call, but the numbers speak for themselves.

A quarter of all our projects include Simplified Chinese, while only 8% include Traditional Chinese. I guess that this settles it.

Again, our clients vote with their feet. 17% for Brazilian Portuguese and only 3.4% for European Portuguese. This probably has something to do with the fact that Brazil has a population of over 160 million.

It doesn’t appear in this chart, but from our check, almost all our iPhone and Android localization jobs also include the iTunes description. This is very important, in order to get more sales with these translations. Thanks for listening to our nagging about it!

About 1/2 of the projects include both translation and review. I think that in practice, more projects use the review feature, as it was introduced during 2010 and for earlier project that are also included in this report it just wasn’t available.

Getting a second independent translator to review the localized application is a great way for improving the quality of the translation from good to great. It also provides the assurance that what you’re releasing is actually ready for release.

If you’re reading this and thinking about localizing your iPhone or Android application too, look no further.

Create an account at ICanLocalize and start your software localization project.